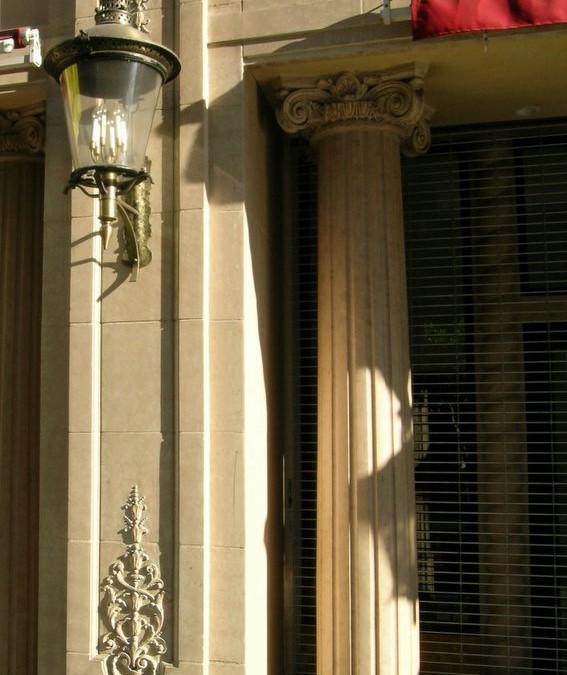 We are announcing the successful release of the renovation of the façade of the Cecil Hotel in downtown Los Angeles.

The owner of the hotel, Dale Lohrer, said: “The Cecil Hotel began its gentrification to restore it to its former glory of the 1920’s when it was one of the largest hotels on the West coast. We peeled away decades of remodeling that had all but covered up its grand days.”

Dale continues: “With the lobby completed, we were faced with the monumental task of how to regain the grand look of its existing storefronts along Los Angeles’s Main Street. We consulted with Anthony Eckelberry on historic and beautification imagery. He was hired and provided detailed plans that would discard the drab 1950’s remodeling and restore the storefronts beyond their original splendor. A year in the making and the unveiling of the facade revealed sculpted columns, moldings and fascia, creating a refreshed look for this landmark property.”

It was a challenge to remove the facade of the building’s street level and replace it with a design that fit with the remaining classical elements of the hotel. I endeavored to give the façade a style that looked as if it had been built that way originally yet was actually a step up in quality and finishes. My research background in classical architecture helped me contribute elements that seem natural for a structure of the 1920’s, yet these forms relate to our modern necessities for visibility and security.

I have completed the design of numerous hospitality design projects. I have been involved in renovations of two Beverly Hills hotels and have been credited with the design of successful restaurants in Los Angeles including Sona restaurant and several properties for clients such as Wolfgang Puck and the Patina restaurant group. Some of my firm’s hospitality design work can be seen on the website, http://www.eckelberry.biz/

The hotel’s owner summarized: “From concept to completion the mastermind Anthony Eckelberry fulfilled our expectations for many years to come.”